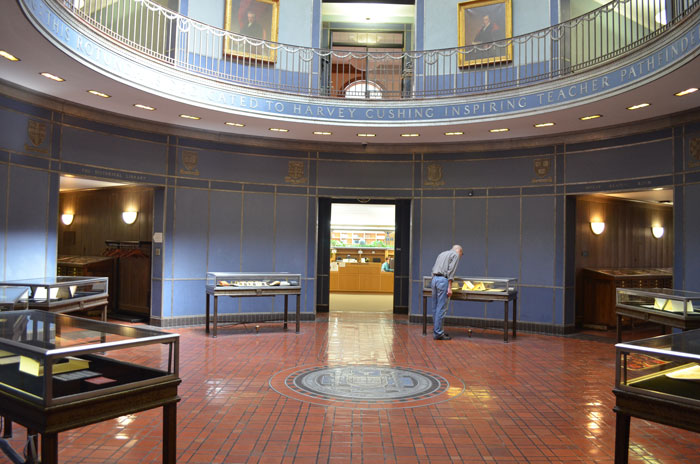 Walk past the Circulation desk at the entrance of the Cushing/Whitney Medical Library and down the corridor displaying art from the Prints, Drawings, and Posters collection. Coming out of the corridor, you enter the Rotunda, the heart of the library.  The Rotunda of the Medical Library honors famed neurosurgeon and bibliophile Dr. Harvey Cushing (1869-1939).  When Cushing, along with Yale physiologist John Fulton and Swiss tuberculosis expert Arnold Klebs, joined their collections together, Cushing successfully advocated for a medical library at Yale. Grosvenor Atterbury, Cushing's classmate and friend since college, was selected as the architect, and brought “into reality Dr. Cushing’s dream of a great medical library.”  Designed in a Y, at the center of the library is the Rotunda, the gift of Cushing's Class of 1891, which was celebrating its 50th reunion.  Inscribed on one side of the Rotunda:
The Class of Yale 1891
Have Contributed to this Rotunda
In Affectionate Memory of Their Classmate
HARVEY CUSHING
Born in Cleveland Ohio, 8 April 1869
Died in New Haven Connecticut, 7 October 1939
The words below the balcony read:
This Rotunda is Dedicated to Harvey Cushing—Inspiring Teacher—Pathfinder in Neurosurgery —Master of the Science and Art of Healing
The crests just below the balcony are of 14 universities that awarded Cushing honorary degrees, including Oxford University and the University of Edinburgh. Eight exhibition cases showcased the Medical Historical Library’s collections, topics in medicine and medical history, and the history of the Medical School for nearly 75 years.  Medical students, faculty, researchers, alumni, and visitors since 1941 have crossed the grand seal on the floor, which incorporates parts of the seal of Yale University with a simple map of the Medical Library.  Many have also stood in the center of the seal and yelled out to experience the strange acoustics resulting from the design of the Rotunda and the colorful skylight directly above the seal.
For the Medical Library’s 75th anniversary, please consider giving towards the Rotunda’s restoration or other 75th anniversary projects.