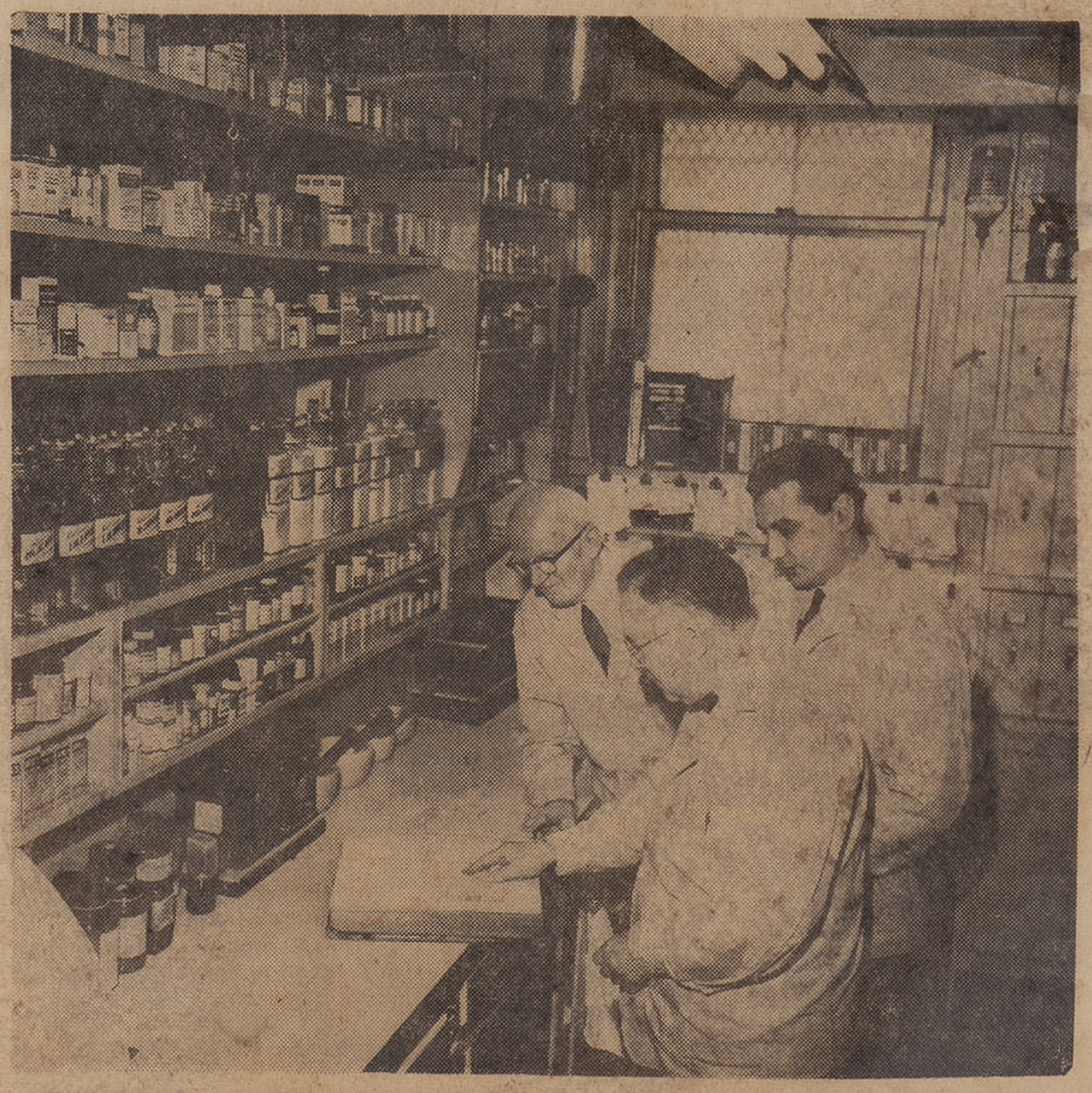 The Medical Historical Library is pleased to announce the addition of a new collection to our archives: The Hall-Benedict Drug Company Logbooks and Ledgers (Ms Coll 66), a collection of seventy-five volumes and six boxes, that documents the history of one of the oldest independent drug stores in Connecticut. The collection includes bound prescription logbooks and bound and loose financial ledgers from the Hall-Benedict Drug Company, which was in operation from 1909 to 1998 in the East Rock neighborhood of New Haven, Connecticut. The collection contains an almost continuous record of the pharmacy’s operations from 1909 to 1970 and is a wonderful resource for researchers interested in the history of pharmaceuticals, pharmacies in the twentieth century, and business in New Haven. The collection was a gift from Thomas F. and Helen Formichella. 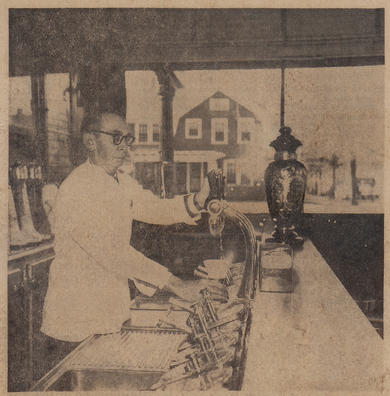 The Hall-Benedict Drug Company was formed in 1909 when Alonzo Benton Hall took on Edward N. Benedict as junior partner. Both men had previous experience in the pharmacy business. Before forming the partnership, Hall operated a pharmacy on Chapel Street in New Haven and Benedict had worked as a druggist and a clerk. Following a national trend of small businesses opening in emerging neighborhoods, they opened the Hall-Benedict Drug Company at 767 Orange Street, a new three-story building located on the northern edge of development in East Rock, New Haven. The business and the business partners were well integrated with the neighborhood. Alonzo Hall and his family lived above the business and Edward Benedict and his family lived on Bishop Street, a few blocks south. The pharmacy provided a message service for local physicians, who would stop by after making house calls, had a bicycle delivery service for customers who couldn’t leave home, and the pharmacy’s soda fountain was a popular hang-out for children from nearby schools and busloads of visitors to East Rock Park. The Hall-Benedict Drug Company remained in operation at 767 Orange Street until 1998, when the business was closed. By that time, they had dispensed over a million prescriptions. 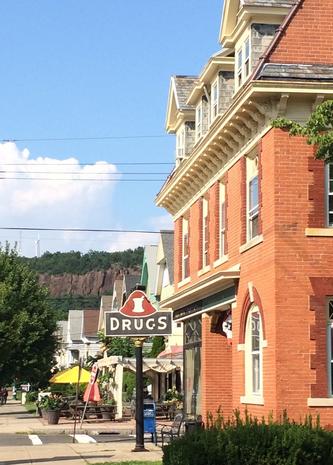 During the eighty-nine years it was in operation the Hall-Benedict Drug Company was a family run business. After senior partner Alonzo Benton Hall's death in 1923, junior partner Edward N. Benedict purchased his share and became sole owner of the company and the property. In 1949, Edward N. Benedict died, and ownership of the business and property passed to his wife, M. Katherine Benedict, and after her death to the Benedict's children, Mary Benedict Killion, Frank D. Benedict, and Edward J. Benedict. In 1977 Thomas F. Formichella Jr., Edward N. Benedict’s nephew, who had been with the company since 1953, purchased the business and property and ran the pharmacy until the business was closed in 1998. He passed away in 2007 and his family retained ownership of the 767 Orange Street building until recently. You can still see the Hall-Benedict Drug Company building with the original pharmacy sign capped with the mortar and pestle emblem, ancient symbol of druggists, at the corner of Linden and Orange Streets in New Haven, CT. 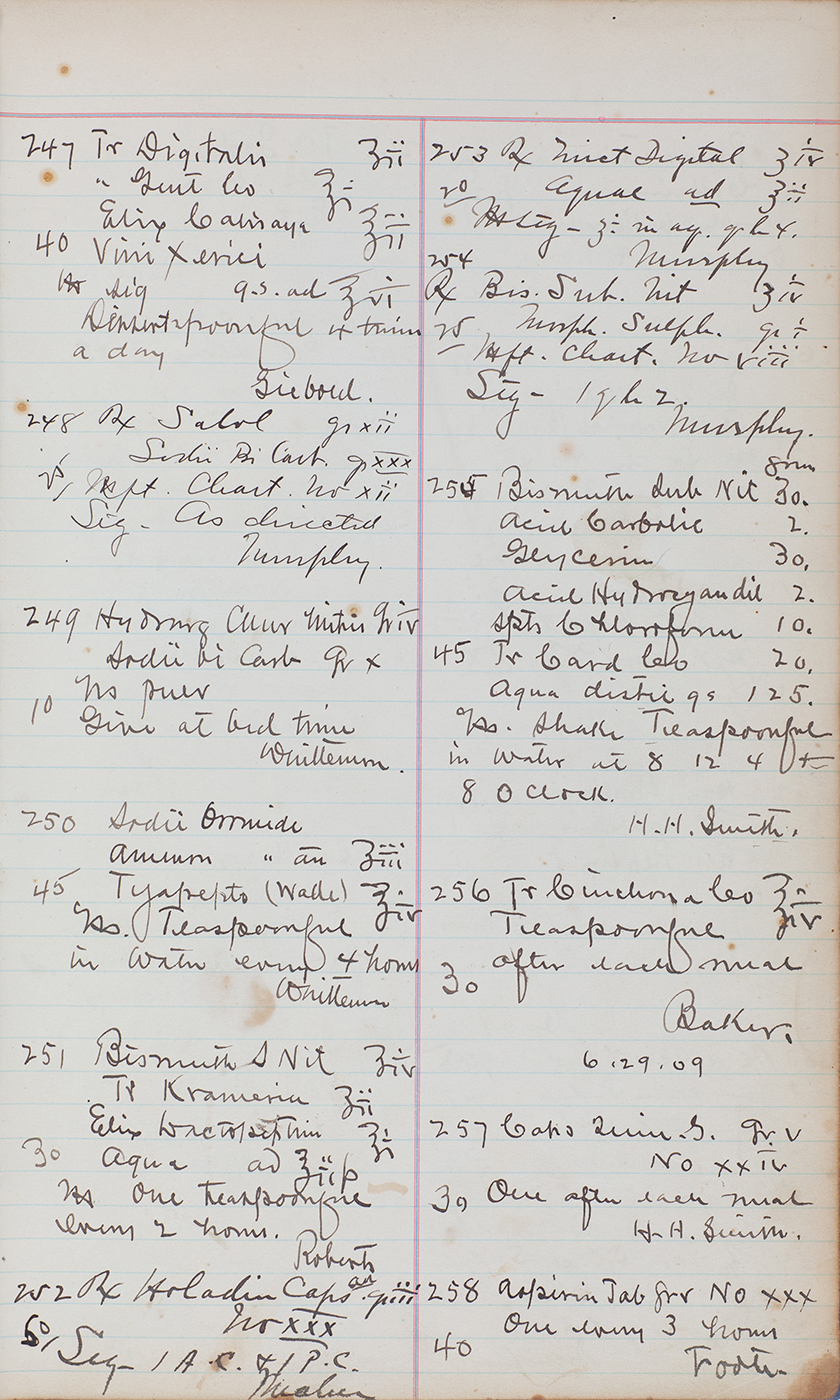 The Hall-Benedict Drug Company collection includes fifty-two prescription logbooks dating from June 3, 1909 to March 14, 1970. The logbooks are organized by date and each hand-written entry includes a prescription number, the name of a medication, and a name, most likely that of the prescribing physician. In 1909, when the Hall-Benedict Drug Company opened, pharmaceutical companies were producing some medications, but most prescription medicines were made to order by local pharmacies, a process known as “compounding.” Entries in the earlier logbooks of this collection often include the formulas for compounding the medication and directions for patients, which makes them especially interesting. The pharmacists also used the blank spaces inside the book covers to write down useful information, such as formulas for non-prescription medications and products sold by the pharmacy and contact information for local vendors, or to paste in newspaper articles about new medicines or other topics of interest. These logbooks provide researchers with a wealth of details about the use and preparation of medications during a significant time in the history of medicine.

The Hall-Benedict Drug Company collection also includes 22 volumes and six boxes of financial ledgers dating from May 7, 1909 to December 31, 1967 that contain hand written entries recording income and expenses for the pharmacy. Most of the financial ledgers contain daily income and expense entries with monthly totals, but there are also expense details, summaries and adjustments, balance sheets, profit and loss reports, and a payroll journal. The financial ledgers trace the growth of the business and relationships with vendors, including many local businesses, over a span of almost sixty years. Even for those unfamiliar with accounting, these ledgers provide a wonderfully detailed glimpse into the financial realities of operating a pharmacy in the twentieth century and operating a local family owned business in New Haven.

All materials in Ms Coll 66 The Hall-Benedict Drug Company Logbooks and Ledgers are open for research and may be requested through Archives at Yale. Selected materials are currently on view in the exhibition cases in the Medical Historical Library reading room through November 2019.

Images from top to bottom:

2. John H. Korn, who started with the Hall-Benedict Drug Company in 1917, working at the soda fountain. Orange Street and the lower portion of the sign are visible through the front window. Photo from “A Pioneer Drug Store Fills a Million Prescriptions.” New Haven Register Magazine, December 18, 1960, page 4.

4. Page from the first prescription logbook used by the Hall-Benedict Drug Company. Prescription entries in this logbook include formulas for compounding medicines and instructions for patients.