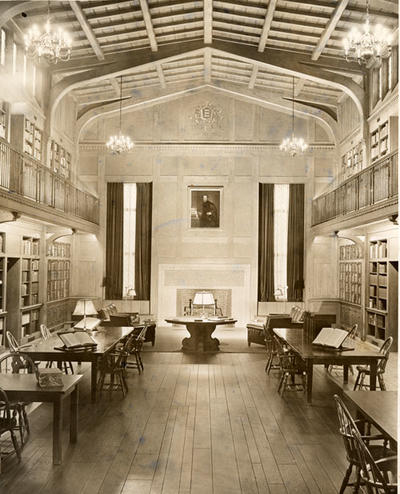 The Historical Library, which houses one of the country’s finest historical medical collections, was part of the original design of the Yale Medical Library (now the Cushing/Whitney Medical Library), built in 1940 and dedicated in 1941. It was the vision of Harvey Cushing, who joined with his two friends and fellow bibliophiles, Arnold C. Klebs and John F. Fulton, in what they called -- with many inventive synonyms -- their “Trinitarian plan,” to donate their superb book collections to Yale if Yale would build a place to house them. As the plan matured it became wedded to the idea of creating a new medical library for the Yale University School of Medicine.

Cushing was the driving force persuading Yale officials to realize his vision. He wanted the medical library to be the heart of the medical school and therefore specified that it be located on the main floor and that the old and new collections be equally accessible. After much delay, it was decided to build the library as a wing to the Sterling Hall of Medicine, using funds from the Sterling bequest. Cushing was informed of the University’s approval of the final plans on the day before his death in October 1939.