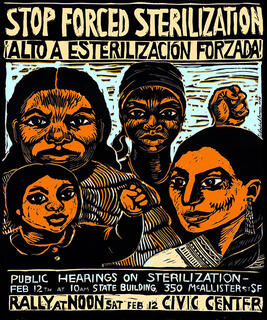 The Medical Historical Library has recently acquired a collection of twenty-nine posters and digital works on themes of social justice and health care by artist/activist Rachael Romero.  Many works date from 1975 to 1982 and were created by Ms. Romero for the San Francisco Poster Brigade which she co-founded.   Originally displayed on city streets—often on the sides of buildings—the posters bear messages such as “Decent Housing is a Basic Right.” and “Preventive Medicine, Not Costly Operations.”

Documented in the collection is “The Fight for the International Hotel,” which became a local cause cèlébre in 1976-78 when the hotel which provided low cost accommodations and community was threatened by, and subsequently razed for, development.