Stephen E. Malawista, M.D.: A Lifetime of Research at Yale

Stephen Malawista had been associated with the Yale School of Medicine for over 50 years until his death last fall. His research bridged rheumatology, cell biology, inflammation, and infectious diseases. As a colleague Gerald Weismann said of him, “One might call him one of the most original, wide-ranging, and persistent biomedical researchers of his generation. He has made an unusually large number of original contributions, working in a rather unorthodox fashion. Rather than moving in a strictly linear fashion, his work has branched and regrouped as it progressed over many years.”  Malawista is best known as the co-discover of Lyme Disease. Through the work of his team on the elucidation of all aspects of the disease and its treatment, Yale and Yale-New Haven Hospital have long been a major center for Lyme Disease research.

Malawista was born in Manhattan in 1934 and graduated from Harvard and the College of Physicians and Surgeons, Columbia University. He first came to Yale in 1958 for residency training under Paul Beeson, but he interrupted his residency to study inflammation and gout as a clinical associate under B. N. La Du and J. E. Seegmiller at the National Institute of Arthritis and Metabolic Diseases (NIAMD). After completing his residency at Yale in 1963, he served as a special NIAMD fellow at Yale under Aaron Lerner.  He became a member of the faculty at Yale in 1966 and served as Chief of Rheumatology for 21 years.

Before he died, Malawista gave his manuscript papers (the Malawista Papers) to the Historical Library. The Malawista Papers contain correspondence with editors, reviewer reports, drafts of articles, photographs, and handwritten notes. 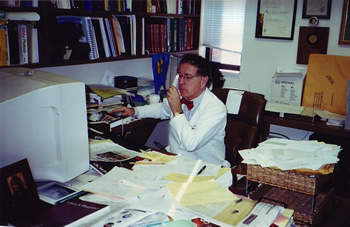