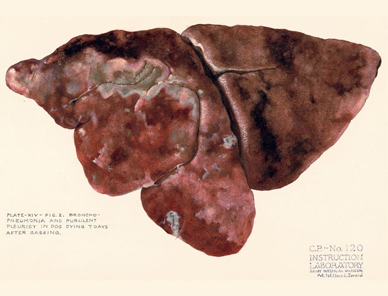 Medical illustration has a long history. For over two thousand years, such illustrations have been used to document and explain anatomy and medicine. Surviving evidence of this can be found in the ancient Egyptian Tomb of Ankhmahor, which features bas-reliefs picturing various surgical operations, in artwork dating from sixth-century B.C. Etruria depicting details of animal anatomy, and in Hippocrates' (ca. 460- ca. 370 B.C.) own medical writings, which he illustrated with drawings and diagrams.

In ancient Rome, law forbade the dissection of cadavers, so Galen (A.D. 131-201), a prominent ancient Greek physician and scholar in the court of Emepror Marcus Aurelius, made illustrations based on his detailed study of animal anatomy. Applying what he learned to human anatomy, he sometimes came to incorrect conclusions, but he remained an authoritative source for another 1300 years. In the Middle Ages, Arabic and Italian scholars of medicine produced many illuminated manuscripts containing illustrations of medical conditions and treatments as well as aspects of anatomy, such as the circulatory system and the nervous system. Illustrations, however, were still based largely on Galen's own studies and on classical medical thought, rather than on direct observation of human anatomy.

It was not until Andreas Vesalius (1514-1564) that many of the first accurate illustrations and descriptions of many aspects of human anatomy were presented to the world. A renowned Belgian physician, Vesalius published hundreds of superbly detailed woodcut illustrations based upon his own observations during the hands-on dissections he performed on cadavers. He corrected many of Galen's prevailing theories, and his definitive tome, De Humani Corporis Fabrica Libri Septum, published in 1543, proved to be the foundation of modern medicine.

Since that time, medical illustration has grown into a profession, and the advances in printing techniques made possible the wider dissemination of illustrations as valuable teaching tools. By the late nineteenth century, a figure arose who turned the course of the profession. Max Brödel, an illustrator at the Institute of Physiology at the University of Leipzig, met some American scientists studying with the same physician, Carl Ludwig, that Brödel worked with. The new connection led to Brödel relocating to the Johns Hopkins School of Medicine in Baltimore, where, in 1911, he founded the first department of medical illustration. Another artist, Frank H. Netter, emerged in the twentieth century to achieve world renown in the field and earned the description "medicine's Michelangelo." Netter's Atlas of Human Anatomy (1989) has been translated into 11 languages.

Starting in the mid-twentieth century, photography started replacing the need for medical illustrations. Photography was both accessible and inexpensive for a multitude of users. Photo-microscopy - the photographing of images through a microscope - was a huge breakthrough in the ability to accurately record images from specimen slides. As the use of photography increased, the demand for medical illustrators decreased. Photography could reproduce with startling ease and accuracy what the eye saw. Yet there is still a purpose for illustration, where the artist can choose to isolate or emphasise one feature over another or represent an interaction. And there is no doubt as to the artistic beauty found in these medical drawings that come from the hand of illustrators, an aesthetic never equaled by the harsh reality of the camera's lens. Today there may be fewer medical illustrators than in the past, but these illustrators show us insights into a world beyond the camera.

One of the most notable illustrators for the Yale Department of Pathology was Armin B. Hemberger (1896-1974). Hemberger trained under Max Brödel at Johns Hopkins and worked at Yale for most of his career. His brilliant images in pen and ink, pencil, gouache, and watercolor combine artistic skill with a remarkable level of scientific accuracy. The images were a particularly important resource regarding unusual cases, providing doctors with a rare opportunity to view medical conditions that they would be unlikely to encounter on a regular basis.  Elmira (Warner) Hemberger, a medical artist in her own right and Armin Hemberger's wife, also drew illustrations for the Department of Pathology, included in the larger collection.

The Pathology Teaching collection contains 664 digitized images. There are more items from this collection that are not online. Please see the library’s catalog record for further details.