Skip to main content
Home → 75 years: A Celebration → History of the Library 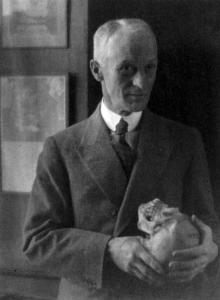 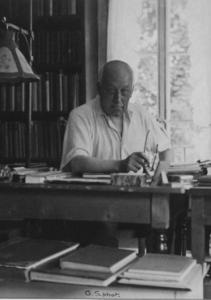 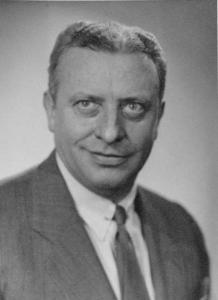 Over the course of 2016 the Harvey Cushing/John Hay Whitney Medical Library will be celebrating 75 years since its founding. See the variety of 75th Anniversary Events which are open to our patrons and friends.

The Cushing/Whitney Medical Library serves the biomedical and health care information needs of the Yale-New Haven Medical Center and Yale University, as well as providing service to area clinicians and medical libraries. While the Library’s physical location is a valued destination for faculty, students and staff, the Library’s website is a gateway to library services and collections from wherever the user is located.

The Medical Library has a rich collection of more than 416,000 volumes, 22,000 electronic biomedical journals, 36,000 electronic books, and dozens of clinical reference tools, databases, and evidence based practice resources, giving users access to research and clinical information. In addition to the modern collection, the Medical Historical Library includes a large and unique collection of rare medical books, medical journals to 1920, pamphlets, prints, photographs, one of the best study collections of weights and measures in the world, as well as current works on the history of medicine.

While collections form the foundation of the Library, the staff within and the services they provide help the Library to remain vibrant to the community it serves. Library staff teach classes, work with faculty on curriculum, help researchers, locate critical materials that Yale doesn’t own.

While all of this has evolved over the past 75 years one wonders if it would have been so if it wasn’t for the unique beginnings that this Library had.

The Vision of a Medical Library at Yale -- Beginnings

Harvey Cushing (Yale College class of 1891, M.D. Harvard 1895), renowned for his preeminence in neurosurgery, was an avid collector of many things and was particularly noted as a bibliophile who collected rare and unusual medical and scientific books and manuscripts. In 1932 Harvey Cushing retired from his surgical career (surgeon-in-chief at Peter Bent Brigham Hospital in Boston) and in 1933 agreed to join the staff at Yale University, his alma mater, as the Sterling Professor of Medicine in Neurology. Although his bibliophilic enthusiasm never left him throughout his career, it was at Yale at the age of 64 that this enthusiasm was revitalized. Not long after Cushing returned to New Haven he broached to Arnold Klebs and John F. Fulton the plan of joining forces and donating their combined rare book collections to Yale.

Cushing envisioned a great medical library with both rare and new books as “a common meeting ground where the different streams of knowledge will coalesce” and a place “where an interest in the history of our great profession will so flourish as to permeate into all departments of a much-divided [medical] school.”

In a letter from Harvey Cushing to Arnold Klebs [October 4, 1934] he first revealed a “Trinitarian plan” to donate their superb book collections to Yale if Yale would build a place to house them.

Dear Arnold: As I may have intimated to you in times past I have always intended to have a check list of my books made and then to have them sold by my Executors so that others may have the pleasure of collecting them as I have done. This idea has begun to wane in favor of leaving them to Yale to be kept together … as a basis of a medico-historical collection.

I have talked this matter over with John [Fulton] and though I did not press the matter, I gather he would like to leave his books also when the time comes, making a Fulton-Cushing collection.

I woke up in the middle of the night with the thought – why not a Klebs-Fulton-Cushing collection so that we three could go down in bibliographic posterity hand in hand.

As the plan matured it became wedded to the idea of creating a new medical library for the Yale University School of Medicine. Cushing was the driving force persuading Yale University officials to realize his vision. He wanted the medical library to be the heart of the medical school and therefore specified that it be located on the main floor and that the old and new collections be equally accessible. After much delay, it was decided to build the library as a wing of the Sterling Hall of Medicine, using funds from the Sterling bequest. Cushing was informed of the University’s approval of the final plans on the day before his death in October 1939. Harvey Cushing suffered a myocardial infarction and died on October 7, 1939 just days after he received word that the funds had be allocated to build the medical Library. The Yale Medical Library (now the Harvey Cushing/John Hay Whitney Medical Library) was built through 1940 and officially dedicated in 1941. 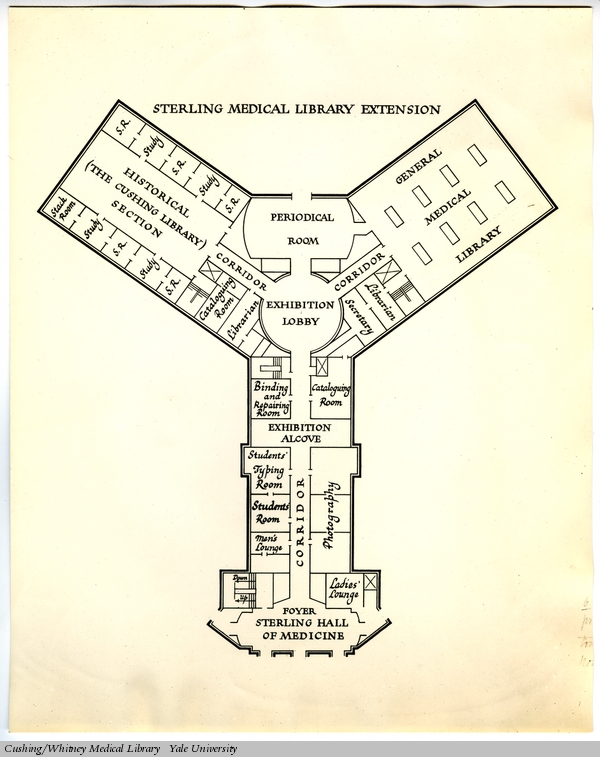 The Yale Medical Library was formally dedicated on June 15, 1941. The Rev. Dr. George Stewart, the husband of Arnold Klebs’ only child and a multiple Yale graduate (B.A., 1915, Ph.D. 1921, D.D., 1939), gave the “Blessing over the Books.” It was he who wrote the inspiring lines carved over the fireplace in the Historical Library. 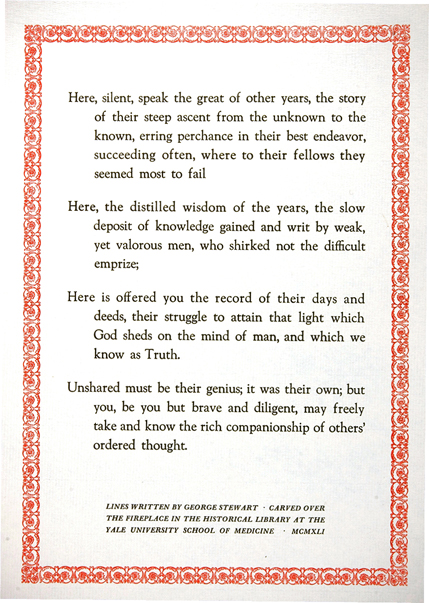 The decoration of the Rotunda at the time of the dedication was a 50th reunion gift of Cushing's Yale College classmates from the Class of 1891. To this day the rotunda remains unchanged. 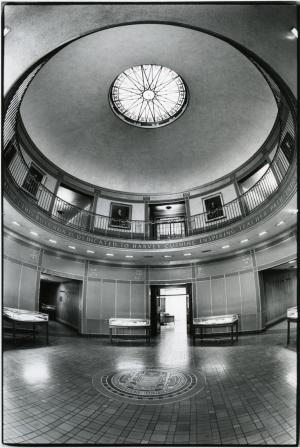 In 1990, a gift from Mrs. John Hay Whitney, daughter of Harvey Cushing, made possible the completion of a major renovation and expansion project. The Library was renamed the Harvey Cushing/John Hay Whitney Medical Library, honoring Cushing and John Hay Whitney. Whitney was a Yale College graduate, a Fellow of the Yale Corporation from 1955 to 1970, a Senior Fellow from 1970-1973, and owner and publisher of the New York Herald Tribune.

In addition to being the home of Cushing’s book collection, in June 2010 the Library became the permanent home of what is known today as The Cushing Center. The Cushing Center is Harvey Cushing’s immense archival collection of specimens from his over 2,200 surgical cases. It includes human whole brain specimens, tumor specimens, microscopic slides, notes, journal excerpts and over 15,000 photographic negatives dating from the late 1800s to 1936. The registry itself is a treasure; a unique resource that documents the history of neurological medicine from its beginning.

This collection was as a result of Cushing’s surgical career before retiring to Yale and New Haven, so he presumed that his collection would stay in Boston. But due to unforeseen circumstances, Cushing decided to move the specimens to Yale in 1934. The collection was originally housed in the Brady Museum sub-basement until 1967. When Dr. Elias Manuelidis took over curation, space became an issue as well as waning use of the collection, and it became necessary to find a new location.  Eventually in 1979 a new space was found to store the now unused collection in the sub-basement of the student dormitory, the ES Harkness Hall.

In February 1994 there was a resurgence in interest in the collection, and a donation from Dr. Albert W. Diddle was awarded to Christopher Wahl, a Yale medical student, who was interested in the collection as the basis for his thesis. He completed his thesis “The Harvey Cushing Brain Tumor Registry: changing scientific and philosophic paradigms and the study and preservation of archives” and received his M.D. in 1996.

This interest, and the realization of its uniqueness, sparked renewed interest in creating a permanent archival space to house the collection. A little-used space in the Medical Library was thought to be the perfect home. Renovation of the space began and at the same time, in preparation for the move, each specimen was examined carefully and cleaned and rehoused in the original specimen jars by a forensic scientist. 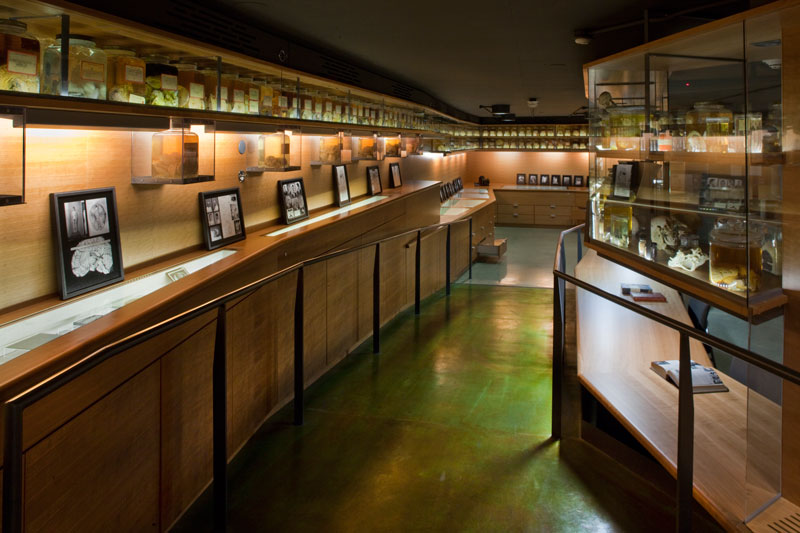 Taking only one year for this total transformation, the Medical Library’s old oversize books stacks opened as the new Cushing Center on June 5, 2010.

What do the next 75 years hold for the Cushing/Whitney Medical Library? The Library and its staff continually watch for new opportunities in the Medical Center to embed themselves and become part of the team.

For more detailed history of the library and The Cushing Center, please visit: