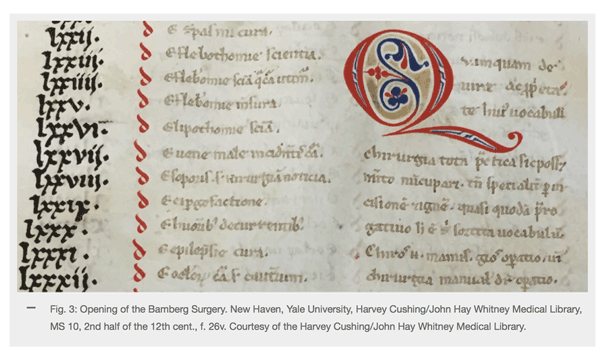 The Bamberg Surgery doesn’t get a lot of love in histories of surgery, because of its patchwork character. As Corner himself said, “it is a notebook, a partially organized collection of notes, memoranda, prescriptions, and excerpts from other books.” But the Bamberg Surgery merits a closer look to contemplate the question with which we began: how do you begin to build up a body of written surgical knowledge when previously you had none?

The Bamberg Surgery draws selectively from the (now complete) translation of (Persian physician​‘Ali ibn al-‘Abbas) al-Majusi’s text, which it fuses with an early medieval text on phlebotomy that circulated under Hippocrates’ name. It then expands on these elements with new pharmaceuticals, new techniques, and elements of anatomical and physiological learning drawn from other texts. For example, al-Majusi’s text had never mentioned marciaton, a compound medicine for a wax-based unguent passed on through the early medieval Latin pharmaceutical tradition. The Chirurgia salernitana had recommended its use, and we find it in the Bamberg Surgery likewise, being recommended for nerve damage from a wound, broken bones, and dislocations.

Similarly, the author cites Galen’s Tegni several times, a translation of the foundational handbook of medicine composed by the 2nd-century Greek polymath, used widely in the Islamic world and, increasingly, in Europe as a basic introduction to medical theory and practice.