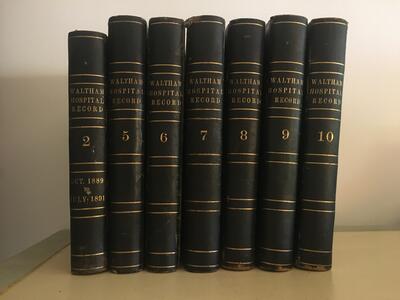 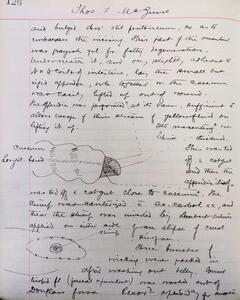 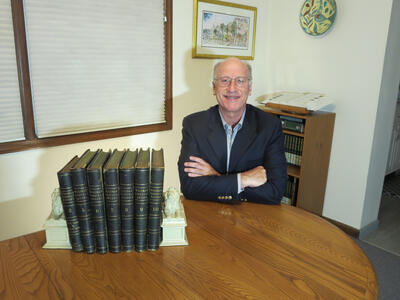 The Medical Historical Library is pleased to announce a new gift of patient records from Boston’s Waltham Hospital (which closed in 2003) dating from 1889 to 1897. Within 7 bound volumes are what are now called progress notes, operative reports, pathology reports, and medication records written by attending physicians. The volumes provide a snapshot of patient care, disease, and medicine in late 19th century Massachusetts. The collection is a generous gift of Alan M. Engler, M.D.; Yale College, Class of 1976.  The Waltham Hospital medical records (Ms Coll 82) are now available for researchers to view in the Medical Historical Library.

Included in the volumes are notes documenting surgery in 1894 for a perforated appendix, in which Dr. Alfred Worcester operated and saved a patient’s life – under ether, and 50 years before antibiotics became widely available. Worcester was the founder of the Waltham Hospital and was known for advocating for early surgical intervention in the treatment of appendicitis and for the use of Caesarean section in difficult births.

In the 1880s, appendicitis was treated by waiting for an abscess to form and was often fatal. Worcester found that he could usually operate before the appendix had ruptured by entering the peritoneum (the membrane lining the cavity of the abdomen) and greatly reduce morbidity and mortality. The reports of his cases and the controversy between him and the surgeons of Boston demonstrate the evolution of medical and surgical practice. The volumes also document trauma (gunshot wounds, people kicked by horses, occupational injuries), cancer, birth injuries, rheumatic fever, scarlet fever, diphtheria, and suicide attempts.