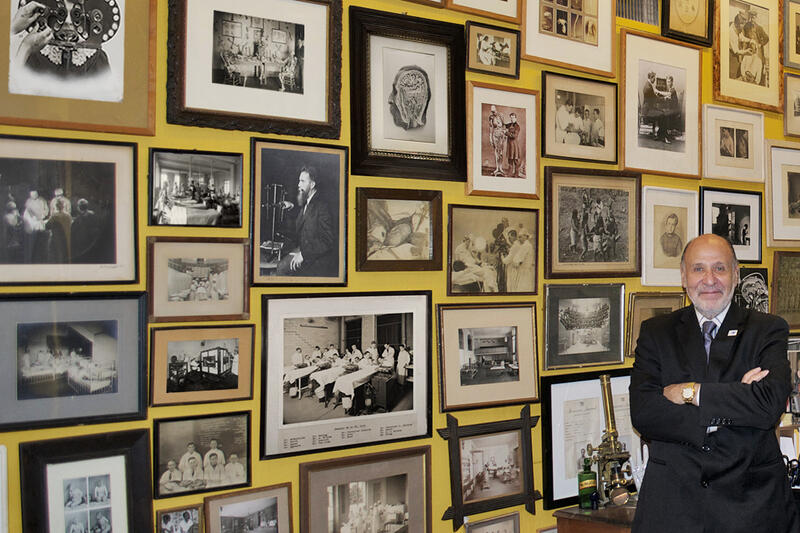 In one image, a physician injects a Civil War veteran with morphine, a common practice that led to widespread addiction after the war. In another, a gold-framed daguerreotype from 1847, an unconscious patient sprawls on a white-draped table, surrounded by men in frockcoats and cravats, documenting one of the earliest uses of ether in operation.

Then there’s the haunting postmortem photograph of a 22-year-old physician who died caring for patients in an 1849 cholera outbreak — a poignant reminder of the risks medical professionals are facing today.

These are just some of the 15,400 photographs in a unique collection recently acquired by the Harvey Cushing/John Hay Whitney Medical Library at Yale that documents — in black-and-white and sometimes graphic detail — a history of medicine from 1839 to the 1970s.

Among the library’s largest and most notable acquisitions to date, the collection both celebrates the evolution of medicine and bears witness to untold human pain and loss.

The Stanley B. Burns M.D. Historic Medical Photography Collection includes images of physicians and medical scientists at work, operation rooms, hospital wards, laboratories, nurses and nursing, notable physicians, surgical specialties, and war medicine. There are also thousands of photos of patients and disease states. The collection is notable for its range of forms, including photo albums, framed photographs, publications, cartes de visite (small photos mounted on cardboard), cabinet cards, postcards, and personal collections assembled by noted physicians. Virtually every format is represented, including boxes of lantern slides and 253 unique daguerreotypes, ambrotypes, and tintypes from the earliest years of photography.

“The Burns Collection is one of the most compelling and comprehensive visual records of medical history ever assembled,” said Melissa Grafe, the John R. Bumstead Librarian for Medical History and head of the Medical Historical Library, the medical library’s special collections repository. “From early depictions of surgery to profoundly personal family images and photo albums, it shows how deeply medicine is interwoven in human lives.”

The collection’s photographic albums, some assembled by physicians, bring alive important chapters of medical history, such as the conquest of yellow fever in Cuba in 1904, the international response to the pneumonic plague epidemic in China in 1911, and facial reconstruction at Walter Reed Army General Hospital documented by medical photographer Alice Becht in 1920.

“Turning the pages of these albums, I am often struck by how visible the patient is, providing some window into past lives and, in some ways, human suffering,” Grafe said. “At other times the collection is a celebration of medicine, highlighting surgical moments and medical techniques that we may take for granted today.”

The wide range of materials complements many of the library’s existing collections, including striking images of mental illness published in the “Iconographie photographique de la Salpêtrière”; thousands of photo-postcards and other images that make up the Robert Bogdan Disability Collection; and more than 100 iconic portraits of Civil War soldiers.

Other materials in the Burns Collection document the development of medical education. Bound volumes of Dr. Howard Kelly’s “Stereo-clinic,” for example, contain thousands of photographs of landmark operations performed by noted surgeons between 1908 and 1918. When viewed through a stereoscope, the photographs provided step-by-step 3D views of the procedures and were used to teach other surgeons.

“The Burns Collection is a major milestone in a decade-long strategic effort to expand the library’s holdings of highly visual materials,” said John Gallagher, the Medical Library’s director.  “We are so eager and excited to have researchers, both here at Yale and beyond, explore this truly unique and rich visual collection.”

Ophthalmologist and medical professor Stanley B. Burns, the collection’s creator, began collecting medical photography in 1975, choosing to focus on an area that until then was largely ignored. Over four and half decades, he amassed more than a million images, filling his New York townhouse and a second home with binders, boxes, and bins with labels as broad as “Nursing” and as specific as “Railway accident wounded treatment.”

As a foremost expert on medical historical photographs, Burns has published widely; curated and consulted on exhibitions; and advised hundreds of films, TV series, and documentaries. Among his engagements was providing photos to an art historian seeking to show that Pablo Picasso’s “Les Demoiselles d’Avignon” was inspired by women with destructive facial syphilis.

Along with the collection’s move to Yale, Burns has endowed a library fellowship to support research in the collection and related holdings of the Medical Historical Library — a gift that aims to ensure scholars will continue to make discoveries in the collection.

“I have spent 45 years building an unequalled resource for understanding the origins and evolution of medical photography and exploring the history of the human relationship to disease and medicine,” he said. “I am thrilled that my collection will be preserved, appreciated, and studied for the long term at Yale.”

The Burns Collection is being processed and evaluated for conservation and preservation needs; initial records are available in Orbis and Archives at Yale. As time and resources allow, portions of the collection will be digitized and made available online.