Skip to main content
Home → Blogs → We've Still Got A Job To Do!

We've Still Got A Job To Do! 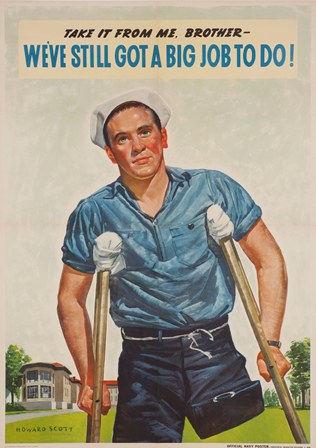 During World War II, the Industrial Incentive Division of the U.S. Navy sought to improve morale among workers in U.S. industrial plants by emphasizing the importance of the plant’s products in the overall war effort. The morale initiative, begun in May of 1943, employed audio interviews and other messages piped in through speaker systems in the workplace;  exhibited combat action photographs, specially commissioned posters and combat motion pictures in the workplace; and arranged for returned combat personnel to visit the plants engaged in war production.

This recently acquired poster, created to boost the morale of defense industry workers during World War II, is on view through April 12, 2013