Beneath the Surface: Watermarks and Flayed Figures in Cushing’s Manuscript of Jacob van der Gracht 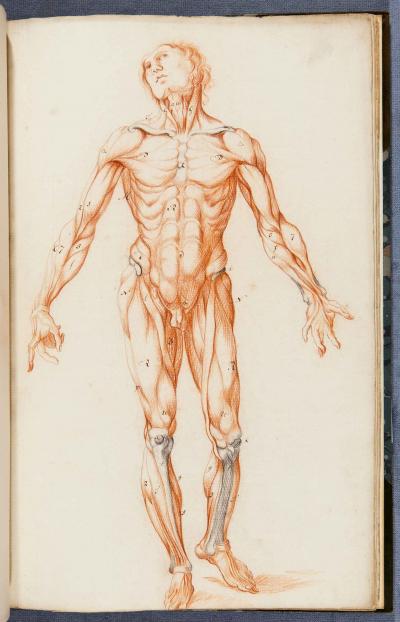 On the back of a letter from the antiquarian and bookseller Menno Hertzberger, dated 29 March 1927, Harvey Cushing recorded his observations concerning a manuscript of Jacob van der Gracht’s printed drawing book, the Anatomy of the outer parts of the human body (The Hague, 1634; Rotterdam, 1660), which had been sent to Boston from Amsterdam. This text, prepared by the seventeenth-century Dutch painter and engraver for the use of “Painters, Sculptors, Engravers, and also Surgeons,” brought Van der Gracht renown during his life, and continues to be his most well known work today. The manuscript version contains twenty-two pages of text and illustration, including a handwritten version of Van der Gracht’s preface, a section on the bones taken from André du Laurens, fragmented comments on the muscles, and explanatory registers for the accompanying illustrations of skeletal and écorché figures that mimic those published in Andreas Vesalius’s De Humani Corporis Fabrica (Basel, 1543). Hopeful that the drawings may have been preparatory works for the engraved plates, on inspection, Cushing found that the use of red and black chalk to demarcate the flesh and bones of the figures, while visually pleasing, was not conducive to the medium of print. Moreover, he writes that the larger scale of the figures and the presence of the registers on the back of the illustrations, made it unlikely that these were the final cartoons from which Van der Gracht worked, though they may have been an earlier experiment by the seventeenth-century Dutch artist. Contemplating whether a previous owner may have added the text to the illustrations at a later date, Cushing noted, “The paper, however, in the original seven leaves of text bears the same watermarks as that on which the drawings are made. It would be interesting to know the date and place of this paper.”

During my time at the Harvey Cushing/John Hay Whitney Medical Library at Yale University as a Ferenc Gyorgyey Travel Research Grant recipient, I have pursued Cushing’s curiosity and investigated the watermarks hidden in the paper of the Van der Gracht manuscript to determine the date and location of its production.  Using online databases, including the Memory of Paper,  compiled by the Bernstein Consortium, my research makes use of resources that were not available to Cushing in the early twentieth century. Moreover, it is only with the relatively recent publications on Dutch watermarks, such as Theo and Frans Laurentius’s study of the Zeeland archives, or Nancy Ash, Shelley Fletcher, and Erik Hinterding’s works on Rembrandt’s prints, that this type of research is possible. Yet, despite the advances made in this field since the early twentieth century, this method for dating a work on paper should be approached with caution, as the medium is both geographically and temporally transient, and therefore should be considered as a general guide for attribution. 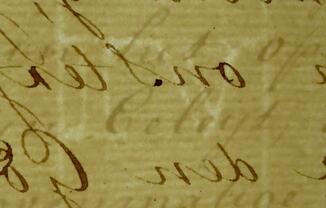 Together, watermark analysis and study of the formal properties of the drawings offers complementary evidence through which we can determine the relation of the manuscript to the published drawing book. The Cushing manuscript offers a clean and consistent watermark of a Strasbourg Bend, a shield with two diagonal bands that is mounted by a fleur-de-lis, and a countermark of the letters “IV."  Indicting the initials of the paper maker Jean Villedary (1668-1758), the countermark, design of the watermark, their size and relation to the vertical chain lines of the paper are consistent with samples dating from Amsterdam and London between 1718 and 1722, making it likely that the manuscript was produced in the first quarter of the eighteenth century (Churchill, no. 437 and Heaward, nos. 73 and 78). Given this date, the possibility that the drawings could have been executed prior to the publication of the printed text is unlikely, and visual analysis of the figures confirms this hypothesis. The process of engraving in the early modern period entailed the incision of a design into a copper plate, which was coated with ink and then pressed onto a piece of paper, transferring the image and resulting in the reversal of the initial example. Essentially, the preparatory work and final print should appear as mirror images of one another. However, in the case of the Cushing manuscript, the figures share the orientation found in the final prints.

Carefully adhering to the model provided by the prints, the drawn figures that occupy the Cushing manuscript are copies made at a later date, and as such offer information concerning the continued engagement with and changing expectations of these types of illustrations by artists and anatomists. Questions concerning this shift are addressed in my on-going dissertation research, which examines the exchange and adaptation of pictorial knowledge between artists and anatomists in the seventeenth-century Netherlands. I am grateful to the Cushing/Whitney Medical Library for its support of my project, and greatly appreciate the opportunity to investigate an inquiry first raised by Cushing nearly one hundred years ago. 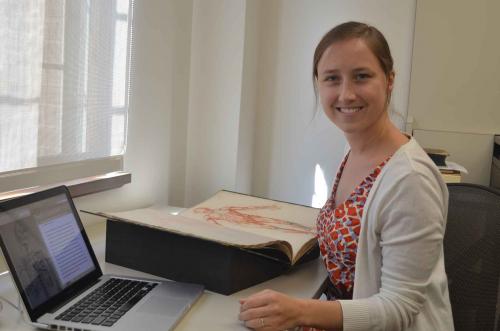 *Erin Travers is a PhD candidate, history of art and architecture, University of California, Santa Barbara, and a 2016 Ferenc Gyorgyey Fellow