Herbaria, collections of dried plant specimens that were (usually) adhered to sheets of paper, were very popular in 18th-century Europe. From professional botanists exploring the Americas to amateur scientists roaming the fields near their homes, many used herbaria to store preserved plants for later study. In order to better understand how early moderns “did” science, I decided to create my own herbarium (see the page below) following the guidelines for plant collection and preservation detailed in 18th-century British manuals. 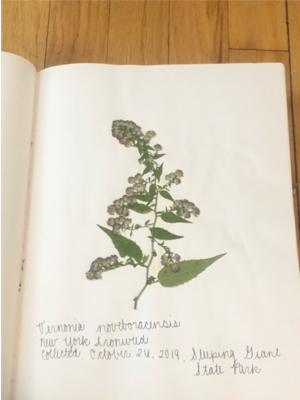 The simple act of following directions ended up being a bit more challenging than I had anticipated! Sitting on my bedroom floor, surrounded by an assortment of plant cuttings, I read and re-read 18th-century botanist William Withering’s instructions for plant preservation. Withering’s famous works contain directives like the following:

“… specimens may be dried tolerably well between the leaves of a large folio book, laying other books upon it to give the necessary pressure: but in all cases too much pressure must be avoided.” (A botanical arrangement of British plants…, pg. xlvi)

I couldn’t help thinking: that’s it? Withering fails to give his readers any indication of how much pressure is too much, a seemingly important detail. Other ambiguities led to a variety of errors on my part, including the burnt fern specimen pictured below. What’s more, when it came time to identify the specimens I’d collected, I found myself even more perplexed. Unable to rely on photographs or iPhone apps, it quickly became that 18th-century botany was like a foreign language. I needed to be fluent, but unfortunately, I only understood about every fourth word. This made for quite the adventure. 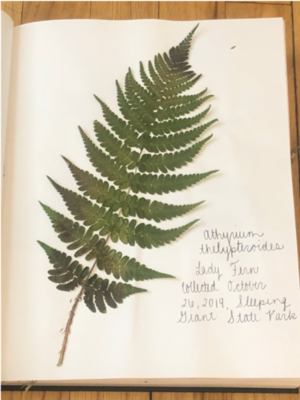 The Medical Historical Library’s collections served as an important resource as I went tromping through the past. For this project, one object was particularly stunning: an actual 18th-century herbarium, complete with plant specimens that are over 250 years old. The herbarium dates back to the 1760’s and has been attributed to Frenchman Jean Seris, who is thought to have been a student at Paris’ Académie Royal de Chirurgie. While I relied on manuals like Withering’s to guide my collecting practices, I followed Seris’ example for format and layout.

Perhaps my biggest takeaway from this project was the immense amount of knowledge required to engage in 18th-century natural history. Interacting with Seris’ herbarium, an object that represents knowledge in practice, provided even greater insight. By reading this “book of nature,” I was able to see 18th-century plants both through Seris’ eyes and my own.

Below: Pages from Jean Seris’s Herbarium with dried specimens, 1761 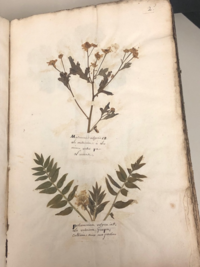 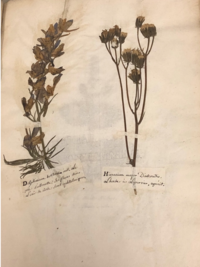 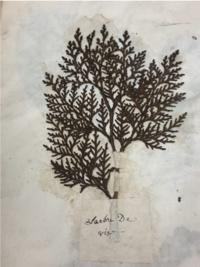